Recently ffmpeg added encoding support for X-Face. An x-face image is a square image, 48 pixels high and 48 pixels wide, and only composed of black and white values. A 2,304 pixel image can not contain much detail but the image was intended to accompany an email as a tiny visual depiction of the sender. Here’s a gallery of jpegs created from xface data to give an idea of what x-faces looked like.

I wanted to try to use the xface encoder to produce a low quality moving image. One issue was that there doesn’t seem to be an audiovisual container that supports xface encoded data, so xface in AVI or xface in QuickTime wasn’t happening. Instead I found I could simulate an xface video experience by transcoding to xface and back to a more normal video format. I used these commands:

I then had a file that showed what xface looks like in video form, but if I increased the size of the video from 48×48 in my QuickTime player then the video would blur and deteriorate at larger sizes. 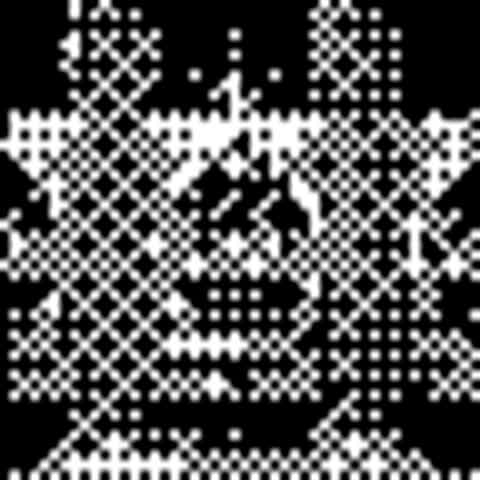 The xface image is a crisp 48×48 pixels but when scaled up to 480×480 for easier viewing the black and white pixels became rounded and fuzzy. Scaling raster images from one size to another can be tremendously lossy and in this example I really noticed the effect of my xface pixel art turning to mush as I increase the width and height. Finding a fix led me to ffmpeg’s documentation on scaling video. From here I could scale my images with the neighbor+full_chroma_inp option which preserves the blocky look at the small pixels while scaling it to a larger size.

Once I figured out this process I searched for a video that would still visually represent its content even at 48×48 frame size. This was a lot harder that I would have assumed and most of the video ended up as indecipherable black and white blocks. Eventually I found a Sanka coffee commercial that seemed to work. The first 10 seconds are hard to make out but the movements of the spoon, coffee cup, and coffee pitcher are all identifiable. So if you’ve ever wondered what xface video might look like, here’s a sample.

And here’s the original from the Prelinger Collection